Here is a small collection of items by some of the most esteemed Danish Modernist designers. These are Palle Bisgaard , Poul Warmind., Bent Knudsen, Andreas Mikkelsen, and Thor Selzer Short biographies appear below the items. 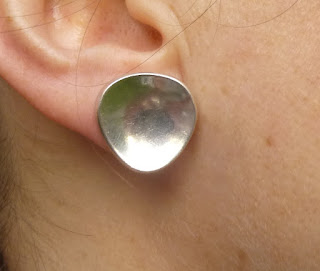 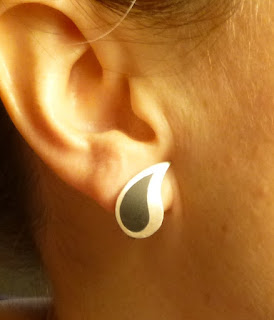 BISGAARD , Palle (P.Bis)
Acclaimed and highly sought after Danish modernist silversmith, who opened his workshop in Kirke Hyllinge, a hamlet outside Roskilde in the 1950s.

Knudsen, Bent & Anni (Bent K)
Bent Knudsen (1924-1997) trained at Carl Cohr i Fredericia and then worked for the Hans Hansen smithy  from 1946 until 1956 when he started his own workshop with his wife Anni (1927-). Their creations, always marked Bent K, and clearly inspired by Bent's time at Hans Hansen, exhibited the understated, clear and simple lines that are the hallmark of Danish Modern. Their work does not appear frequently on the market, and is much sought after.
Whilst the workshop existed until a few years ago, production of silver items was gradually phased out during the 1970s, when another of their passions, the paper cut, became their major concern and this has enjoyed worldwide acclaim and sales ever since.

Mikkelsen, Andreas (A.MIK)
Andreas Mikkelsen (born 1928) joined the Georg Jensen silver smithy in 1955 - - initially as a member of the firm's management. He was to become head of sales, head of production and product development and even rose to the post of managing director.

All the while he was nurturing his artistic talents and collaborated with the silversmith Ove Wendt between 1970 and 1978 as well as independently. In the late 1980s he started designing Jewellery and other products for the Georg Jensen company. These items cover everything from golf tees to Christmas decorations. Many of his jewellery designs were also incorporated into the Georg Jensen repertoire whilst he seems to have retained the copyright for them, which may seem unusual, but if you are the managing director, you can always make exceptions.
Confused? Not surprising - but this is my explanation for why you find those gems of fantastically sleek modernist jewellery by Mikkelsen with different combinations of signatures. They may appear with either A.Mik or MIKKELSEN on its own. They may appear with a combination of A.MIK and O.WENDT. Finally they may appear with the Georg Jensen logo, with no designer mark.


Renowned modernist who worked in the small town of Kirke Såby near Roskilde from 1963 to 1983. He is particularly well known for his technique of matt enamelling. He also produced modernist pieces in gold and pewter.


Posted by Scandinavian Silver News at 12:53 No comments:

Arne Johansen (1927 – 2004)
A master of modern design, Arne Johansen started his workshop in Roskilde, Denmark, in 1954 and continued production until 1993. His work is characterised by the pure simplicity of line, elegant design, the substantial weight of the silver, and the expertise of the craftsmanship.
This listing is exclusively dedicated to Arne Johansen,  with 7 items new to the site and 6 returning items.


Posted by Scandinavian Silver News at 09:58 No comments: