Here is a wonderful collection of silver jewellery by the most famous Danish modernist design workshop, Hans Hansen. It includes several extremely rare and exclusive pieces. There are three returners amongst the selection of brooches, bracelets, cufflinks, rings and a necklace. They are all made of Sterling silver. The designers include Karl Gustav Hansen,  Bent Gabrielsen Pedersen, Bent Knudsen and Allan Scharff.


See below for a short history of the company 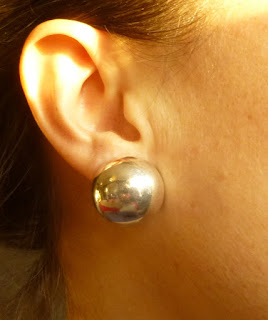 Hans Hansen (1884-1940) started his own silversmithy in the 1920s in the Jutland town of Kolding with the mechanised production of silver flatware. The company's range of products and reputation for superb modernist design was however established by his son, Karl Gustav Hansen, who was apprenticed in his father's workshop in 1932, and consolidated by Bent Gabrielsen, artistic director from 1953 to 1969. Karl Gustav Hansen was born in 1914 and followed in his father's footsteps to become a silvesmith. Even before he produced his apprenticeship test piece in 1934 he had created a series of designs in a simpler, functionalist style which he called 'Future'. He went on to study at the School of Sculpture in the Academy of Art and undertake a 3 months study trip to Italy. In 1940 Hans Hansen died, and the now 25 year old Karl Gustav took over the family firm, designing jewellery and increasingly flatware and hollowware. He designed practically no jewellery during the peiod 1953 -69 when Bent Gabrielsen was employed by the company, but resumed thereafter, and remained active until his death in 2002
A number of other well-known Danish modernist silversmiths started their careers at the Hans Hansen company and their designs were clearly influenced by the studio. These include Bent Knudsen, Eigil Jensen (who went on to work for Anton Michelsen) Gail Spence and Allan Scharff  who both progressed to Georg Jensen.
The company was taken over by the Royal Scandinavia Group in 1991 and thus incorporated into Georg Jensen. Several Hans Hansen designs are still being produced by Georg Jensen.

Posted by Scandinavian Silver News at 07:40 No comments:

Georg Jensen, probably the best silversmithy in the world

And probably the most famous one too. Georg Jensen established  his smithy in 1904 to create affordable jewellery by using non-precious metals and stones and with great design  and craftsmanship at its core.   From the Danish Art Nouveau , Skønvirke, through Art Deco, Functionalism, to Danish Modern, the company continues to pursue and maintain this fundamental mission.  I am offering a collection of 13 pieces spanning 100 years of great design.  5 pieces have been offered before, the rest are new. to the website.   The designers include Harald Nielsen, Henry Pilstup, Arno Malinowski, Henning Koppel and Nanna Ditzel

For further details and to place your order, go to the website www.scandinaviansilver.co.uk


Posted by Scandinavian Silver News at 02:10 No comments: