Here is a fabulous collection of jewellery from Norway's leading silversmithy, David-Andersen All the most famous series from 1950 onward are represented;  silver, silver-gilt and enamel, the Troll series, the Saga series, and Unn Tangerud's bronze series from the studio workshop of Uni David-Andersen, the great granddaughter of the founder.
There are 20 pieces to chose from, of which 11 are new to the shop.  There are rings, brooches, bangles and a bracelet, pendants and even a pair of earrings. 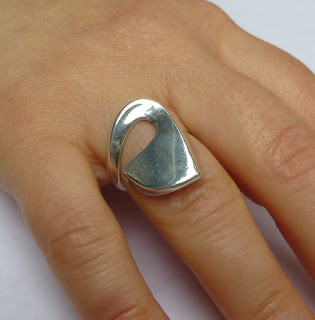 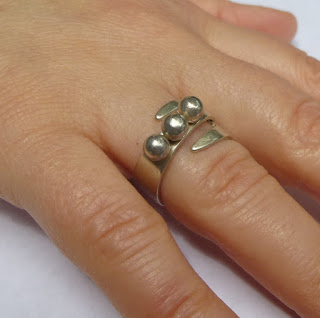 Posted by Scandinavian Silver News at 10:04 No comments:

Here is a small collection of silver jewellery by the illustrious Danish silversmithy Anton Michelsen, as well as the later collaborative work with Royal Copenhagen Porcelain. Most of the items are brooches, and indeed, almost all of these have been on the website before, giving you another chance to acquire one of these much loved brooches.

A short history of this great silversmithy is provided below.

The Anton Michelsen Silversmithy was founded in 1841, and had thus long celebrated its centenary when it was bought up by the Royal Copenhagen Porcelain Manufactory in 1968. As Royal Copenhagen then went on to purchase Georg Jensen as well, Michelsen was gradually merged with Jensen, and today only the annual forks and spoons bear the Michelsen name.

NB.
1. Georg Jensen was apprenticed to Anton Michelsen in the 1890s, not the other way around! Several of the most popular late 20th century Jensen pieces were actually originally designed for Michelsen.

2. In the 1850s Michelsen was commissioned to redesign the Royal medals and has been making these by appointment ever since. Hence the expertise in enamelwork which led to
3. the most popular jewellery design of the twentieth century , the Marguerite Daisy, created in 1940 to celebrate the birth of Princess (later Queen) Margrethe.


4. After its takeover by Royal Copenhagen in 1968, silver designers were encouraged to work with ceramicists, which resulted in some very interesting and sought-after creations.

5. At least since 1950 Anton Michelsen acknowledged its designers by stamping their signatures on each piece.  The Michelsen company commissioned such innovative designers such as
Karen Strand,  Gertrud Engel,  Eigil Jensen,  Nanna & Jørgen Ditzel,  Knud V Andersen and Jens Windfeld Hansen.

6. Michelsen set up a subsidiary in Sweden during the WWII and for some time after. MIC was the maker's mark used for items produced in Sweden, and this mark is often seen on Gertrud Engel designs of the 1950s, although they were also made in Denmark. In Sweden they also cooperated with the Swedish company Borgila.
Source:
Antik & Auktion 4/99


Posted by Scandinavian Silver News at 05:42 No comments: